I was watching Monday Night Football along with 28 million others when Buffalo safety Damar Hamlin tackled Cincinnati wide-receiver Tee Higgins on what appeared to be a routine pass, catch and tackle play. I noticed in real time that Hamlin jumped up from the tackle, hesitated for a few seconds and then fell hard on his back. I thought he had fainted. Head injury seemed the likely culprit. However, when they showed the instant replay, it was obvious that there had been no head contact whatsoever. It was a clean play. One I had seen thousands of times. 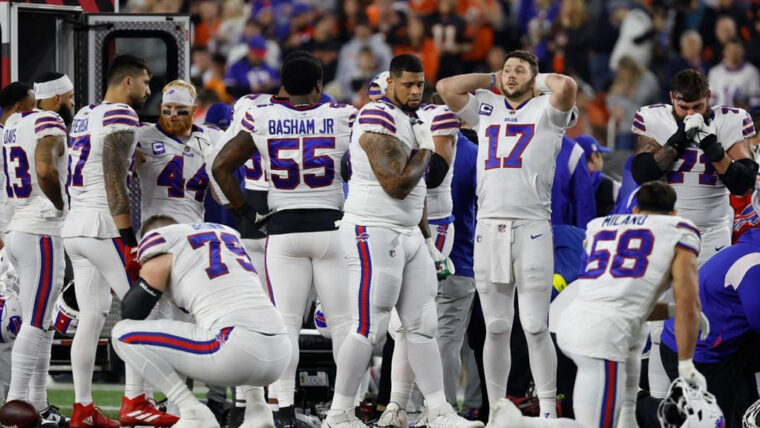 We would later learn that Hamlin had gone into cardiac arrest after receiving a blow to the chest during the tackle. It seems it was a freak accident – something called “commotio cordis.”

In such cases, “there is nothing wrong with the heart,” said Dr. Hari Tandri, the director of the cardiac arrhythmia program at Vanderbilt University Medical Center in Nashville, Tennessee. “A healthy heart, when hit with blunt force at a specific time,” Tandri said, “can launch into an abnormal and potentially deadly rhythm.”

Emergency medicine physician and spokesperson for the American Heart Association, Dr. Comilla Sasson, said: “It’s not about how hard of a hit it was. It’s actually about the timing of when the blow happens.”

In other words, Hamlin was hit in the wrong spot at the wrong time, causing his heart to go into a chaotic rhythm and quickly shut down. Were it not for the speedy response of the medical professionals Hamlin would have been dead within minutes.

Thankfully, Hamlin seems to be recovering quickly, with no immediate signs of neurological damage.

A Call for the End of Football

The incident viewed live by millions and tens of millions in replay has predictably launched an avalanche of calls for the dismantling of football as a violent sport. The concern and outcry are understandable.

Interestingly, American Football doesn’t even make the top ten in many lists of the deadliest sports. It’s typically beat out by Base Jumping (number one), Horse Riding, Scuba Diving, Gymnastics, Boxing, and Soccer (where there is a 75% chance of getting a concussion).

According to a 2021 report, more high school cheerleaders suffer head injuries than football players. That statistic makes sense when you consider that it is not uncommon for cheerleaders to be thrown 30 feet in the air and unless their teammate can catch them, they have no gear to protect them in the fall.

I must confess that I am not an unbiased voice in these matters.

I love football. I’m from Texas, after all.

I began playing football with my older cousins shortly after I learned to walk. I played full contact football in Junior High and High School (in an age when we were taught to tackle head-first), intramural football in college, and organized flag football until my early retirement at the age of 30, not coincidentally the year my first child was born.

I was never very good at it, but I loved every minute on the football field.

However, as much as I love football, I love Jesus more and his inconvenient words demand that I take a serious look at my love for a sport where others are permanently damaged. Jesus, of course, doesn’t speak directly to the issue of football, but he has a lot to say about our concern for our neighbor.

Jesus complicates the issue. He has an annoying way of doing that.

Life is full of risk. We are working to mitigate life-threatening risks every time we walk out our door. The question then is the balance between mitigating the risk and caring for our neighbor.

If my neighbor loves to play football and is willing to take the risk, should I penalize him by denying him that right?

If my neighbor loves the even more injury-prone sport of gymnastics and is willing to take the risk, should I stifle her creative outlet by denying her that right?

If my neighbors love going to NASCAR races (another sport that regularly makes the dangerous sports list, and one of the only sports with spectator fatalities), should I deny them that right?

Is that loving them well?

As a child, every time I wanted to ride the Cyclone roller coaster at Astroworld, my mom would deny me.

“God will take care of me!” I would cry, throwing everything I learned in Sunday School in her face.

“Yes,” she would respond, “but, Jesus also said, ‘thou shalt not tempt the Lord thy God!’”

I love my mom, but I’m pretty sure she was taking Jesus’ words out of context (by the way, she didn’t want me to play football either). Are we really “tempting God” when we put ourselves in risky situations?

The overarching ethic of Jesus Christ is to love God with all your heart and to love your neighbor as yourself, as personified in his Golden Rule: “So in everything, do to others what you would have them do to you …” (Matt. 7:12a).

So, the question is – If I had the talent and skills to play professional football would I want you to block me from playing (even if in doing so you had my best interest in mind)?

The answer is a resounding, “No!”

The Humanization of Football

So, how then do we love each other well while participating in a dangerous sport like Football?

The answer to that question was on full display that fateful Monday night when Damar Hamlin went down. You might not have noticed it. It hit me like a ton of bricks because I am also familiar with what happened on Sunday, October 24, 1971. The Detroit Lions were playing the Chicago Bears that day. I was ten years old, and the Lions were my second favorite team behind the Oilers.

Detroit Lions wide-receiver, Charles Frederick Hughes died that day. He is considered the only player to die on the field during a game. He was trotting back to the huddle after a routine pass to the endzone in which he had served only as a decoy. He fell to the ground and never regained consciousness.

A postmortem examination revealed that Hughes was suffering from undiagnosed and advanced arteriosclerosis (one of his coronary arteries was 75% blocked) and that he had a family history of heart disease. He died from what we now call a “widow-maker.”

I mention Hughes, not because of his death, but rather because of what happened after his collapse to the turf.

The team trainers rushed to the field and did what they could. A doctor from the stands ran to see if he could help. An ambulance was called and finally arrived, removing him from the field as quickly as possible so that the game could go on as scheduled.

The stunned crowd watched in silence as the game was quickly resumed. The Bears held on to the lead and won the game. The Lions players learned later that night that Hughes was dead.

There was no media coverage. Zero. Zip. Zilch. It’s as if it had never happened – erased from NFL memory. A fact made obvious in that not a single commentor mentioned Hughes’ death in the live broadcast of Hamlin’s injury.

“This has never happened before,” was a common refrain that night. A comment that must have stung Hughes’ widow, if she was watching.

In addition, there were no NFL rules changes initiated from the death of Hughes. It seems that no one even thought about it.

The real changes, however, started in 2009 with “concussion protocols,” effectively taking the decision of playing a player away from coaches and team trainers, and placing it in the hands of an unbiased, third party.

The dramatic movie, “Concussion,” portrays the uphill battle for these changes.

The rules changes in Football are increasingly making it a different game than the one I grew up with in the 1970s. And that’s a good thing.

Hughes, Hamlin, and the Salvation of Football

But back to the comparison between Hughes and Hamlin.

Medical professionals and Team Trainers were present and well prepared.

The ambulance was close by and ready to go.

The Game was stopped, and coaches, players and fans were more concerned with the injured than the game.

Players from both NFL teams, clearly shaken by what they had witnessed, gathered around Hamlin during the treatment, with many of them kneeling to pray and some openly weeping.

Communication on Hamlin’s condition was ongoing and compassionate.

ESPN quickly made the decision to not broadcast the replay repeatedly in respect of Hamlin’s family and friends.

After the ambulance had left the field, reports initially suggested the game was going to restart following a five-minute warm-up, prompting an outpouring of anger on social media.

During ESPN’s broadcast of the unfolding events, Booger McFarland, a former NFL player and analyst, called for the league to abandon the game.

The two team’s coaches conferred with referees, and players were then told to head to the locker room, while the game was announced “temporarily suspended.”

The NFL then issued a statement saying that league commissioner Roger Goodell had announced the game had been postponed.

“The NFL has been in constant communication with the NFL Players Association which is in agreement with postponing the game,” the statement concluded.

“Our thoughts are with Damar and the Buffalo Bills. We will provide more information as it becomes available,” the NFL added.

Fans, many of whom paid for high-dollar tickets were told to go home. Not a single person booed.

The NFL Players Association said, “the only thing that matters at this moment is Damar’s health and well-being.”

“Please pray for our brother,” tweeted Bills quarterback Josh Allen while players from across the league took to social media with similar messages.

Some fans traveled to the University of Cincinnati hospital where Hamlin was being treated, as did teammate Stefon Diggs.

Fans flooded to Hamlin’s fundraising website, set up for a community toy drive, sending donations on his GoFundMe page, which had a target goal of $2,500, but reached over $2 million after the injury.

Both the Bills and Bengals had already secured places in the NFL’s playoffs, but the game was important for both teams as they sought to get the number-one seed in the AFC.

The winner would have earned a first-round bye and home-field advantage throughout the postseason. In an instant, none of that seemed to matter to either team. All they cared about was Hamlin and his full recovery.

It may seem a small thing to you, but I believe what we witnessed that day was nothing short of the salvation of football.

For that I am grateful. It means I can love Jesus … and football too.