My first memory of the concept of “the battle of the sexes” was the tennis match between Women’s Tennis champion, Billie Jean King, and retired tennis star, Bobby Riggs. It was 1973 at the Houston Astrodome and ninety million watched it worldwide. Billie Jean won in three sets. The pre-match buildup was far more entertaining than the match itself. It instantly became a comic icon for the more serious battle that women were waging for a semblance of equality in the workplace. 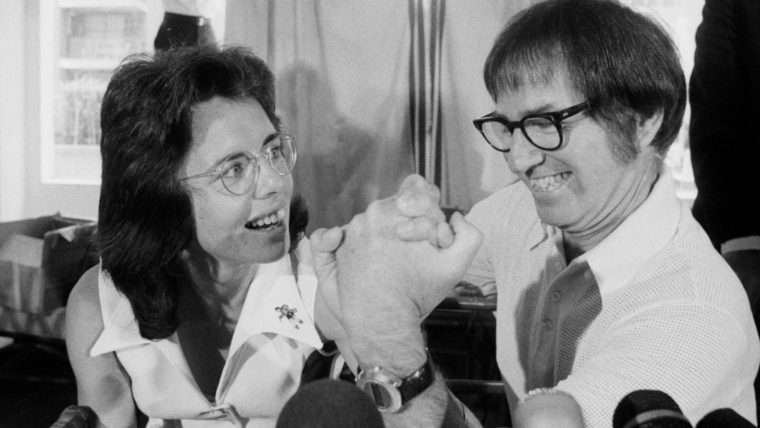 The Battle of the Sexes

Your desire will be for your husband, and he will rule over you” (Genesis 3:16).

Susan Foh reads God’s pronouncement that the woman’s desire would be for her husband, but that he will rule over her (Gen. 3:24), and concludes that the battle of the sexes was born. [95]

First, the equality of the man and woman is shown in that God held them equally responsible. He addressed each individually (He did not address the woman through the man as one would expect in a patriarchal culture), and their personal consequences were the same (each one’s pain in labor increased).

Second, the man and woman revealed their sameness in the way they reacted to their sin and God’s interrogation.

They both covered themselves. They both hid. They both attempted to shift the blame.

The key point is that they were synchronized in their reaction. This is a manifestation of their sameness. They were obviously created equally in the image of God.

Third, there was a breach in the male-female relationship that served as a stark contrast to their pre-fall relationship. This breach is best described in the punishment phase of the narrative.

Allow me to briefly summarize my conclusions from before (see Women in Ministry, Volume Nine).

The punishment narrative described both the personal and interpersonal consequences of sin.

The serpent, woman, and man all suffered the same personal consequence: Their work became more painful.

The interpersonal consequences were also the same: all relationships became fraught with an enmity that was absent before the Fall. The most relevant consequence for our study is that which described the personal relationship between the man and the woman.

God described the fracture in the relationship between the man and the woman when he said to the woman, “Your desire will be for your husband and he will rule over you” (Gen. 3:16). This verse is rife with mystery and controversy. [96]

The second half of the statement is relatively clear. The man will now have a dominating authority or rule over the woman.

The word used for “rule” is a common word that means to have total authority over another, as in the case of a king over his subjects.

Clearly, this means that the man will take control of the relationship and rule over the woman, as a king rules over his subjects. Again, the point of the narrative is that this was a change in the relationship due to sin.

The first half of the statement is not as clear. What does God mean when he tells the woman that her “desire” will be for her husband?

The Hebrew word used for “desire” (tesh-oo-kaw) is unusual. It is used only two other times in the Old Testament.

The NAS Hebrew Lexicon offers the following definitions for tesh-oo-kaw: desire, longing, craving; of man for woman; of woman for man; of beast to devour. [97]

The only other two occurrences of tesh-oo-kaw in the Old Testament are:

Traditionally, the verse has been interpreted to mean that the woman would long for the man’s love and affection but instead would receive his authority and rule.

Some interpreters associated the “desire” with sexual desire. God increased the woman’s desire for sexual intimacy with the man, lest she avoids the matter altogether because of the increased pain involved in childbirth.

Some scholars reason that because mankind’s days were numbered (with the blocking of the tree of life), the need for the woman to bear even more children became critical. Therefore, the woman’s desire for her husband (her desire to have sex, and therefore, more children) was increased. [98]

Ortland blames the woman for the breach in the relationship. He paraphrases Genesis 3:16 as follows: “You will have a desire, Eve. You will want to control your husband. But he must not allow you to have your way with him. He must rule over you.” [99]

Ortland continues explaining, “If this is the sense, then God is requiring the man to act as the head God made him to be, rather than knuckle under to ungodly pressure from his wife.” [100]

Ortland, therefore, places all of the blame on the woman for the strain in the relationship. The corruption of sin caused her to want to control her husband. In response, her husband is simply exercising his God-given role to “rule over her.”

Although Ortland admits other possibilities, he concludes that this rendering more nearly matches the context. [101]

Culver doesn’t bother much with the mystery of Genesis 3:16. His contention is that Genesis 3:16 is a description of who men and women are, not what they should or should not be. It is written in their DNA, and therefore, it is the order that will always prevail, if only in the main. [102]

Ortland and Culver reject out of hand the possibility that it is who the man and woman are because of sin, and that Christ may have something else to say about it.

In the end, none of these interpretations are satisfactory, or convincing.

In keeping with the spirit of the word “desire” found in Song of Solomon 7:10, the best guess may be that the woman’s desire for her husband simply signifies her desire to achieve the intimacy she experienced with him before the Fall (Gen. 2:24-25).

Sin would keep her from achieving the equality, mutuality, and interdependence she once knew. In its place, she would only find an oppressive rule.

Susan Foh, however, makes an important observation when she notes the striking similarity between Genesis 3:16 and Genesis 4:7. [103]

Interestingly, in both usages, God is speaking to someone who has just sinned. Both use the same combination of the words “desire,” and “rule over.” Both are also found in the earliest part of the Pentateuch and therefore are more likely to come from the same oral tradition (as opposed to the Song of Solomon usage).

The New Nature of the Male-Female Relationship

God speaking to the woman in Genesis 3:24 – “Your desire (tesh-oo-kaw) will be for your husband, and he will rule (maw-shal) over you.”

God speaking to Cain in Genesis 4:7 – “Sin is crouching at your door; its desire (tesh-oo-kaw) is to have you, but you must rule (maw-shal) over it.”

Clearly, tesh-oo-kaw in Genesis 4:7 carries the connotation of a desire to devour as a beast or to rule over. God’s exhortation to Cain was that he must not allow sin to conquer him, but rather he must fight back and rule over (master) it.

It cannot be denied that the exact combination of words is significant and could be a clue as to the enigma of Genesis 3:16.

In the pre-fall state, there was no hierarchy or rule, but because of sin the harmony, balance, and mutuality of the marriage relationship were destroyed. After the Fall, the woman’s desire was to control her husband, but as a consequence of sin, her husband would triumph and rule over her.

The narrator was describing the patriarchal world in which he lived.

Amazingly, antithetical to his culture, he envisioned an Eden where the oppressive nature of rule and authority was not present. Sin destroyed that vision and now (in his patriarchal world) there was marital strife centered around control and authority.

If the man was created to have authority over the woman from the beginning, why would the rule of the man over the woman be included as a consequence of sin? Attempts to explain this away are unconvincing.

Here again, Ortland is representative as he summarizes the hierarchists’ position: “… both male-female equality and male headship, properly defined, were instituted by God at creation and remain permanent, beneficent aspects of human existence.” [104]

However, Ortland goes on to say that male headship must be properly defined so that it will not be confused with male domination (which he equates to the rule of man described in Genesis 3:16), something even the strictest hierarchist disavows.

Ortland concludes that, once the distinctions are clearly defined, “the antithesis to male headship is male domination.” [105]

If male headship and male domination are antithetical, why must Ortland go to such great pains to distinguish them? Antithetical ideas need no qualification.

The fact that the two are so easily confused mitigates against qualifying them as antithetical.

In fact, the most natural antithesis to male domination is egalitarian equality. Those two positions could never be confused. I believe, the Genesis narrator understood that. Thus, he refused to give any explicit indication of headship or authority before the Fall (even when he had ample opportunity to do so), while giving clear and explicit command for the rule of the man after the Fall.

The narrator wanted to draw a stark contrast. That much seems clear.

The unmitigated rule or authority of the man over the woman (as exemplified in any hierarchal system) is a direct result of sin.

The equality, mutuality, and interdependence of the pre-fall male-female relationship were destroyed.

96. Culver, WIM, p.40. Culver claims, “No mere man can know exactly what this is.” He points out that Karl Barth acknowledged that there is some form of feminine “mystique” involved, but then declined to define it.