I’m the eldest among my siblings. I’m not sure what that means. My sister is the most driven. My youngest brother is the smartest. My other brother (his twin), who is mentally challenged, is the kindest and wisest. I guess that just leaves me the oldest. I’m living proof that coming out “first” means absolutely nothing. 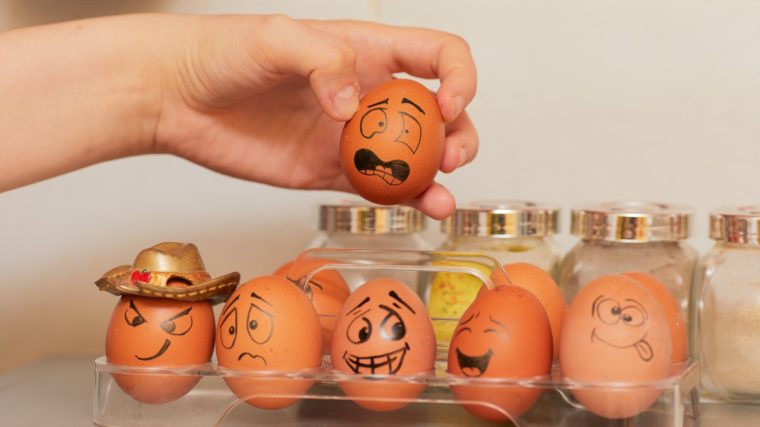 The Chicken or the Egg?

So, which came first? The chicken or the egg? Does it even matter?

Hierarchists make six arguments from the creation narratives (Genesis 1-3) to undergird the idea that the man was created to have authority over the woman and that a woman, therefore, should never have direct authority over a man.

I will address each of these six arguments over the next few blog posts. Please be patient. These arguments are critical for those who are devoted Biblicists.

#1 – The man was created first, and the woman came from him.

Susan Foh writes that “though the way the woman was created does not indicate inferiority, it does indicate a difference in function.” [38] Foh may be correct, however, she makes a gigantic exegetical leap when she concludes that “as she followed him in creation, she is to follow his lead as her husband.” [39]

Foh’s conclusion is based almost entirely on her assessment of the word “helper,” and her assumption that the woman’s existence is dependent on the man because she came from him. [40]

Foh misses the point of the creation narrative: the woman’s existence, like all of existence, is dependent on God, and only God. The man was passive (asleep) throughout her being created to show that he had nothing to do with it.

In fact, chronological primacy as a claim for superiority or authority is greatly contested in the Old Testament Scriptures. The fallacy of hierarchy of birth within a strict patriarchal system is a recurring theme of the patriarchal narratives.

Abraham was not the eldest in his clan, yet he became the father of faith. Ishmael was the eldest and rightful heir to the Abrahamic blessing, yet Isaac, the younger son was chosen. Esau, the eldest sold his birthright and lost the blessing to his younger brother, Jacob.

Jacob had twelve sons. The eldest was Reuben. However, Jacob gave the double portion inheritance to Joseph, one of the youngest, awarding him two tribes, when he blessed both his sons.

When Jacob blessed the sons of Joseph, he gave the superior right-hand blessing to the younger son, over the protestations of Joseph.

The theme of the usurpation of the progenitor does not end with the patriarchs.

When Samuel was called to anoint a king from the sons of Jesse, he was told specifically to avoid all judgments based on outward appearances (which apparently included birth order).

Jessie’s eldest son was the regalest. Yet, Samuel anointed the youngest son, David. Before David died, he bypassed his eldest son, naming Solomon as heir to the throne.

Certainly, birth order has little significance to God, and no bearing on authority. The consistent message of the patriarchal narrative is clear – being born first (or created first) does not, in and of itself, constitute authority or rule.

In addition, the line of reasoning for male over female hierarchy based on the fact that the man was created first is inconsistent with the first creation narrative.

However, God explicitly commanded the man and the woman to rule over the animal kingdom, in spite of being created last.

It is also important to understand what the narrator is doing as a storyteller. In Hebrew storytelling, the narrative often moves to its climax in a linear fashion, so that the last action in the narrative is the most important.

This was certainly the case with the first creation account where the male and female were created last yet were considered the crowning jewel of creation, ruling over that which was created before them. The best was saved for last. [41]

As Phyliss Trible notes, the second creation account “moves to its climax, not its decline, in the creation of woman. She is not an afterthought; she is the culmination.” [42]

If we followed the pattern of the first creation account, the woman by virtue of being created last, would be the crowning jewel of creation and would rule over whatever was created before her (i.e., the man).

This, of course, is absurd. The woman does not rule over the man by virtue of her position in the creation account any more than the man does by virtue of his.

Another common Hebrew literary pattern is that of inclusio. [43] This is a technique where the first event in a narrative mirrors the last event to form bookends around the narrative. This literary form is found in multiple places in Genesis.

Trible explains, “the central concerns of a unit often appear at the beginning and the end as an inclusio device. Genesis two evinces this structure. The creation of the man first and of the woman last constitutes a ring composition whereby the two creatures are parallel. In no way does the order disparage the woman.” [44]

The Woman Came from the Man

The idea of inclusio as an interpretive framework for Genesis, chapter two also has ramifications for the idea that man is in authority over woman because she came from him.

I have already indicated that the woman being taken from the side of the man was, in part, to highlight the interdependence and mutuality of the male-female relationship.

The woman was created from the man and the man is born from the woman. One is not more important than the other, neither is one over the other, rather they are completely dependent on each other.

In a world that often venerated the power of female fertility with various goddesses, this was an important corrective. Adam and Eve were no gods or goddesses. They stood on equal ground under the lordship of their one and only Creator-God.

In addition, as Maryrose Derksen aptly points out, if we apply the same interpretive logic to the creation of the man (who was created out of the earth), then the earth would be in authority over the man. [45] Clearly, this interpretive logic fails.

Foh argues that “it is likely that the Hebrew mind would have understood the connection between Adam’s being the source of the woman and his position as head.” [46] She offers no reasons for her confidence in this.

She does admit, however, that were it not for 1 Corinthians 11:8-9 and 1 Timothy 2:13 we might have missed the idea of man’s headship in the creation narrative. [47]

I disagree with her interpretation of 1 Corinthians 11:8-9 and 1 Timothy 2:13, but the point is that she agrees that headship is not explicitly, or even clearly found in the text. One must dig for it, and even then, without help from Paul, would not be able to find it. This could very well be because it’s not there.

If we can show that this is not what Paul had in mind, then by Foh’s own reasoning, male headship is not to be found in the notion of the man being created first.

#2 – God gave Adam, not Eve, the command prohibiting the consumption of the fruit from the tree of knowledge of good and evil.

While it is true that Adam received the command, the text is silent on how the woman received it.

We know that God spoke to the woman, just as he spoke to the man (Gen.3:13). Most commentators assume that the man relayed the commandment to the woman after receiving it from God, but that is an interpretive assumption.

Schreiner writes, “God likely commissioned Adam to instruct Eve about this command, signaling Adam’s responsibility for leadership and teaching in the relationship.” [48]

Schreiner hedges his bet with the qualifier, “likely.” He does this for good reason. There is nothing in the narrative to support his assumption.

Schreiner assumes that God commissioned Adam to instruct Eve. One could just as easily assume that after creating the woman God gave her the command not to eat, directly, just as he had with the man. There is nothing in the narrative that mitigates against it.

In fact, a better case could be made for the likelihood of the latter assumption. If God gave the command directly to both the man and the woman, they would be equally responsible for their transgression, as the narrative clearly indicates.

Therefore, it seems more in keeping with the evidence that God gave the command directly both to the man and the woman. Why wouldn’t he, with such an important message?

Schreiner admits that “this argument for male leadership is suggestive, not decisive.” [49]  Here Schreiner is correct. I would only add that this is an argument from silence and therefore, not even a good suggestion.

Two down, four to go.

In my next blog post, I will address at some length the next and possibly most salient argument for male hierarchy, which is that the woman was created to be a “suitable helper” for the man.

41. See John L. McKenzie, “The Literary Characteristics of Gen. 2-3,” Theological Studies 15 (1954), p.559; John A. Bailey, “Initiation and the Primal Woman in Gilgamesh and Genesis 2-3,” Journal of Biblical Literature, June, 1970, p.143. Baily calls the importance and position of the woman in Gen. 2-3, “extraordinary when one realizes that this is the only account of creation of woman as such in ancient Near Eastern literature.”