The role of women in the church is an issue that concerns many Christians, especially in the Evangelical world. While most mainline Protestant churches have been dealing with the issue for years, most evangelical churches are only beginning to wrestle with what the Scriptures reveal, and how to apply it in the twenty-first century. [1] 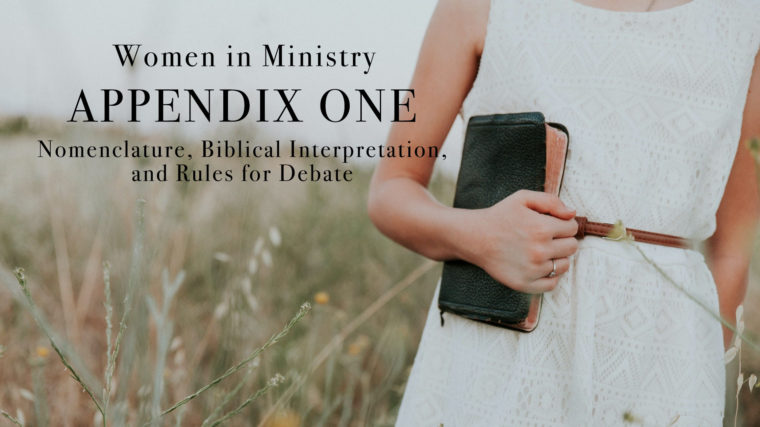 This Position Paper is my attempt to help my church understand the multiple and sometimes complex interpretive questions involved with this issue. Most of this work is derivative. It is an attempt to bring together the best scholarly work in a format that is easily consumable.

A word about nomenclature is appropriate at this point. There is no satisfactory way to label the various camps on this issue. Any label carries a load of preconceived notions. Therefore, I have chosen to use a limited, and fairly standard terminology. I will refer to “hierarchists” as those who believe that the creation accounts portray an inherent hierarchy of male over female and that this hierarchy should be maintained in marriage, the church, and society. [2]

I will refer to “egalitarians” as those who believe that there is no hierarchy revealed in the creation accounts and that the ideal for marriage, the church, and society is equality between male and female that is both ontological and functional. [3]

I realize that there is a wide spectrum of beliefs within each of these categories. In fact, I would not fall easily into either one. However, for the purposes of our examination, I will simplify using these as references, and making subtle differentiations as necessary.

Key Issues in the Debate

I will also follow a straightforward and typical thought process with respect to the debate. I will begin by addressing the male-female relationship as portrayed in the creation accounts. A critical point of divergence in the debate is whether or not one believes there is an inherent hierarchy present in the pre-fall creation narrative. Therefore, a detailed analysis of Genesis 1-3 is essential.

1. As most evangelicals, I will approach the text as the inspired Word of God, perfect, true, and unfailing. I will reference scholars who take a more critical approach to the text because I believe their work adds value to the debate. However, that in no way diminishes my commitment to the Scripture as God’s Word.

2. Every part of the Biblical canon is open to examination. When a particular piece of Scripture was written, or who wrote it, is irrelevant with respect to its authority or value as Scripture. If it is in the Canon of Scripture, then it will be addressed as a valuable part of the inspired Word of God. [5]

5. The culture of the Bible can best be described as male-dominated, and patriarchal. In fact, male domination in general, and patriarchy in particular, has been the standard sociological construct in most parts of the world, for most of human history. Therefore, it has not only impacted the writing of Scripture but also almost every interpretation of Scripture. It should be no surprise then, that patriarchy is considered the norm throughout the biblical narrative, and that most interpretations of Scripture have been filtered through a patriarchal lens. [8]

6. There are biblical principles that transcend time and place. The interpreter’s task is to understand the original historical-socio-cultural setting of the text, and with that context in mind, ascertain the intent of the author. In other words, the interpreter seeks to answer the question, “What was the original author or storyteller attempting to say to the people he was speaking or writing to?” Within this original intent, there is most often a timeless principle that can be identified.

7. The final step in the interpretive process is to transfer the timeless principle found in the text into the contemporary setting, making relevant applications. It is this process of considering historical, rhetorical, grammatical, and socio-cultural clues, mining for the timeless principle, and making a contemporary application that is the essence of the hermeneutical process.

In addition, there are a number of faulty suppositions and arguments that both hierarchists and egalitarians sometimes employ to solidify their position, or summarily dismiss their opponent’s argumentation. I will briefly expose only the most popular of these.

2. Scripture does not contradict itself. While this is true, it is also misleading. There are timeless biblical principles that are never contradicted in Scripture. However, it is clear that there are narratives, commandments, and actions described in the text that are contradictory. Attempts to reconcile these contradictions often results in exegetical gymnastics that can lead to rather bizarre conclusions. It is much more reasonable to understand that every story, commandment, or action in the Bible carries with it a timeless principle. It is this timeless principle that is never contradicted in Scripture.

3. Scripture interprets Scripture, with the “clearer” passages being used to interpret the “less clear” passages. This hermeneutical principle suffers from a problematic subjectivity, namely deciding which passages are “clear” and which are “less clear.” Both sides of the debate can conveniently decide that certain passages that would mitigate against their side are “less clear,” even though said passages may not have any more interpretive issues than other relevant passages. [9]  This principle is too easily abused. In addition, it makes no sense to assume that just because a Scripture text is not very clear, that it must then be subservient to a Scripture text that happens to be clearer. In fact, the opposite may be true. The more ambiguous passage may very well be the key to understanding the clearer passage. [10]

4. The perfect Word of God is void of any human opinion or contamination. The Word of God is divinely inspired, perfect, and true; but, it is God’s Word delivered through human agency. Unlike other faith systems we do not believe that the Bible was dropped from heaven pre-written and completed, nor was it written by a single human author. [11]  Rather it is a compilation of numerous books written and edited by many authors, from varying cultural perspectives, over a period of more than a thousand years. When Paul was writing his letters, for instance, he had no idea they would someday be considered authoritative Scripture. God speaks through Paul’s letters, but they remain letters written by a human being, to other human beings, and must be interpreted as such.

6. Any time a biblical writer mentions something that does not ring true to my contemporary culture, it can be dismissed as a product of the ancient biblical culture, and is therefore no longer applicable. This is problematic on multiple levels. First, there is the subjective nature of deciding what does or does not ring true to my contemporary culture. Second, as mentioned above, culture saturates every line of Scripture. It was just as impossible for the Biblical writer to get outside of his culture, as it is for the interpreter to get outside of hers. If one is going to dismiss a concept in Scripture simply because it reflects the ancient culture, one would have to dismiss every verse of the Bible. Third, this approach arbitrarily elevates contemporary culture above the ancient Biblical culture (and all other cultures in history, for that matter). To automatically dismiss the ancient cultural traditions and mores, in favor of modern-day, American cultural traditions and mores is an act of cultural arrogance.

7. My opponent is a liberal who does not really believe the Bible. My opponent is a right-wing fundamentalist who is ignorant and closed-minded. Both of these ad hominem arguments unfairly dismiss an opponent and close down discussion. There is an old adage in the legal profession: When arguing a case in court, if the facts are on your side, argue the facts; if the law is on your side, argue the law; if neither the facts nor the law is on your side, attack the witness. These statements are simply an attempt to attack the witness and shut down the discussion. They are a sure sign that the one making the accusation is losing the debate and out of ammunition. They have no place in a proper discussion of the important issues.

In conclusion, I will attempt to highlight the major issues involved in the debate over the role of women in the church. There are strong and thoughtful scholars who fall on all sides of this debate. I will recognize and respect their views while attempting to expose potential fallacies in their arguments. Ultimately, I pray that the following pages will enlighten your path and cause you to think more deeply about a critical issue in the life of the twenty-first century Christian Church.